Gatwick Airport Ltd and the air traffic control company NATS  consulted recently on London airspace changes concerning several London airports  (Gatwick, Stansted and London City). This 1st  consultation, which ended in January 2014, proposed several ideas for the
re-design of plane arrival and takeoff routes to Gatwick airport, but did not  reveal where those routes would be.

The present (2nd) consultation follows on  from this and specifically concerns Gatwick routes below 4000ft – above the very
area we all live. The proposal is a fundamental shift away from the current wide  distribution of arrivals to a very precise and narrow ‘Superhighway’. As  residents of Kent approx.18 miles east of Gatwick, we are being asked to express  our opinion on this re-design based on a ludicrously vague .ppt map (map 35) and  some very technical jargon…. It is very confusing and the ‘consultation’ closes
on August 14th.

The most important thing you need to know is  this:

The present (2nd) consultation document  still fails to show where the exact narrow arrivals Superhighway route will be…
it might be over us, it might be ½ a mile to the west… who knows, Gatwick are  not telling anyone enough to work this out.

We do know however that the Superhighway will be a curved line  somewhere between East Grinstead and Tunbridge Wells. In fact, Gatwick are  proposing TWO Superhighways in our area in this 2nd  consultation: one for daytime flights and one for night flights. However, please  remember that in the long run, if Gatwick get their Second Runway, this  particular night/day configuration may change! Both Superhighways will run  northwards from a single ‘merge point’, a junction in the sky that works like a  fixed postcode address for the new GPS’s being fitted on planes, and this merge  point will be somewhere in the south –we suspect possibly at Mayfield or Seaford.

All the planes arriving from the coast will funnel towards that  merge point location at timed intervals so that they can be assembled on to the  Superhighway about 3 miles apart in order to fly up and turn west to join the  main western approach near HEVER and down towards Gatwick in a continuous line.  This is why the location of the merge point is extremely critical for our area.  The location of the merge point will determine the precise angle of each  Superhighway as it curves towards the main western approach line. Each  Superhighway will have ALL the arriving planes on it heading to Gatwick. On  average this will mean 250+ aircraft, 266 days a year, at between 2300 - 4000ft,  day and night, without respite. The daytime reality during the summer peak  flight period will be up to one plane per minute.   The night flight reality will be up to 50 planes 11:30pm-6am, but the  Government are currently considering allowing Gatwick to fly  more.

BUT WE NEED YOU TO OBJECT TOO, EVERY SINGLE VOICE  COUNTS!

So, what’s the benefit of  proposing this Superhighway?

Here’s the science bit…Precision Navigation (referred to as PBN or  R-NAV) has already been introduced on the existing NPRs (Noise Preference Routes  or areas in the sky in which aircraft approach and takeoff).

Guiding aircraft via Precision Navigation reduces the extent to  which aircraft are distributed (width) within the NPRs (areas where aircraft  approach and takeoff). The 2ndConsultation proposes  that it should be introduced for arrivals to facilitate the handling of more
aircraft and to reduce noise impacts on a wide number of residents.

However:It is uncertain whether the noise impacts will be reduced as the Superhighway is designed to handle MORE aircraft and Gatwick is planning to grow bigger than Heathrow!!! It’s something often referred to as a ‘slippery slope initiative’.

Anecdotally, Gatwick likens the noise under a narrow Precision Navigated NPR Superhighway and between 3000-4000ft to: ‘being within 1 metre of  a vacuum cleaner’. But remember, that’s just talking about noise as an average. Both the aviation industry and the Government are still averaging out plane  noise using an out of date measurement system devised in the early 1980’s, which takes no account of the number of planes overhead and the actual human  experience of the noise they make. Modern research shows this metric system is biased towards aviation companies. The conventional level at which Gatwick and the Government say‘significant community disturbance’ occurs is at 57leqs, which is a 16 hour average value. To put this in perspective, with arrivals between 3000-4000ft and each plane at 60-70dB that’s like saying that someone shouting at you continuously for 16 hours is acceptable, and wouldn’t affect your daily life at all.

The consultation document is below. Please respond to it by the 14th August 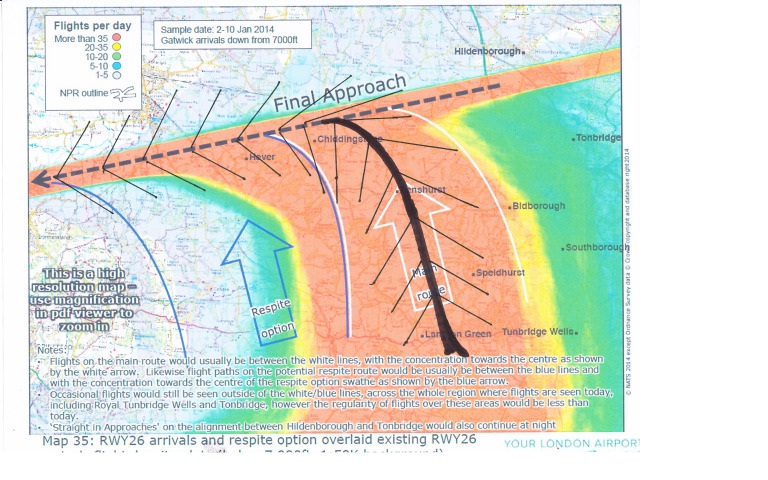